Up to now the Awarua Communications Museum has been a relatively self-contained facility, but recent events have extended its reach around the country!
On Thursday 29 September 2016 wiring was completed from a new long-wire receiving antenna to two heritage broadcast receivers, a World War II 'Trawler' transceiver and a Yaesu Amateur Radio receiver. 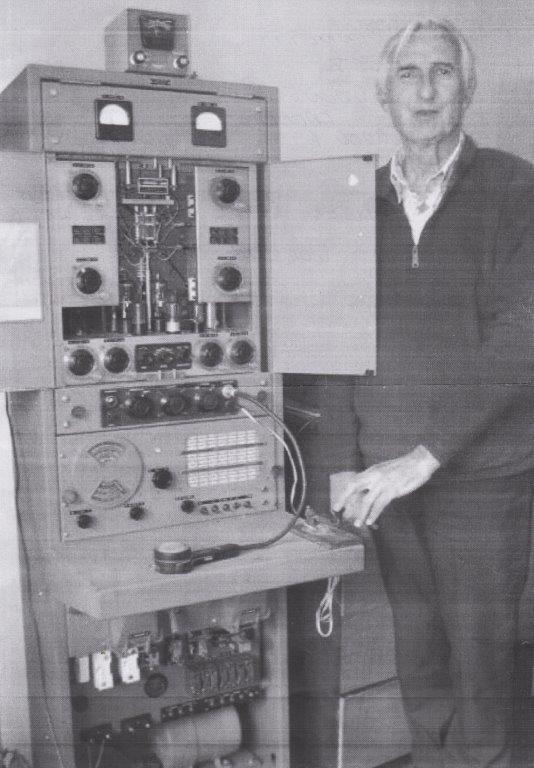 WWII 'Trawler' Transceiver with donor, Alan Bennett - 2016
We were very pleased to hear noise-free reception on all equipment and were particularly impressed by the beautiful tone of the broadcast signals received on the heritage radios. Additionally, the Amateur Radio bands came alive on the Yaesu receiver and we could clearly hear radioteletype and Morse Code traffic being passed.
On Thursday we also completed the installation of a dual band 2 metre/70 centimetre aerial. This vertical whip antenna is designed for best use on the Amateur Radio VHF and UHF bands and was then ready for testing.
The vertical whip antenna received its test on Saturday 1 October, 2016. Alex Glennie, Museum Manager and a licenced Amateur Radio operator, connected a personal 2 metre radio set to the whip and using the Museum's official callsign of ZL4VLB made a test call on local amateur radio frequencies. To his surprise and delight an immediate 'pile-up' of amateurs occurred all keen to make contact with 'Awarua Radio' via the Communications Museum.
Alex also called on the NZ Amateur Radio 'national' VHF network. Among other traffic, Alex's call was received and replied to by Matt Bullen, ZL1GLK in Whakatane, Bay of Plenty. Matt Bullen had previously provided the Museum with pictures from his great grandfather, John Bullen who was a cable man with the NZ Post and Telegraph Department. 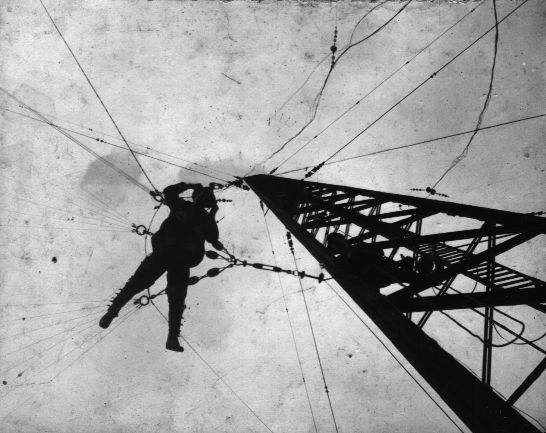 Workman installing 'counterpoise' earth on Telefunken mast - c1913
One task performed by John Bullen had been to assist with the construction of the original Telefunken spark-transmission tower in 1912-1913.
How great to have the first ZL4VLB transmissions from the Museum re-making a connection with the origins of VLB/ZLB Awarua Radio over 100 years later.
Many thanks to Alex, Matt and John Bullen for their parts in making this great event come about.